Victory for Threatened Sharks and Rays at Memordum of Undestanding (MoU) of Migratory Sharks! 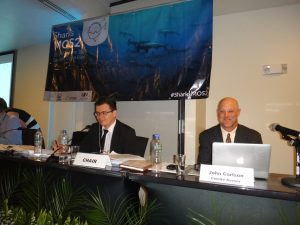 Delegates present at the 2nd Meeting of Signatories of the Memorandum of Understanding (MoU) of Migratory Sharks, convened in San José Costa Rica, voted unanimously today to list 22 species of threatened sharks and rays under Annex I of the MoU.  Now, countries will have to coodinate work in a regional context to stop the negative trend these populations are exhibiting, mainly due to overfishing.  In the Eastern Tropical Pacific, overfishing and the lack of efficient controls by Regional Fisheries Management Organizations (RFMOs) have been identified as the main threats for the survival of these species.

Three shark groups are of relevance to Costa Rica:  two species of hammerheads, three species of threshers, and the silky shark.  These species are listed under the IUCN’s Red List of Threatened Species, and are commonly caught by Costa Rican fishers to commercialize their fins and meat in international and domestic markets, respectively.  Manta rays and Mobula rays were also listed.  These species are not commercialized in Costa Rica, but they are extremely valuable for the dive industry.

“Better times are coming for sharks” said a satisfied Randall Arauz, of the Costa Rican organization PRETOMA.  “The signatories acknowledged by concensus that these species are in urgent need of conservation actions, its time to act NOW”, urged Arauz.

“Regional cooperation is indispensable to ensure that all exploitation of migratory sharks is sustainable” said enthusiastically Regina Domingo, collaborator of PRETOMA and founder of the spanish organization Nakawe Project.  “The MdE will provide countries and the RFMOs of better tools to implement policies towards the improvement of the conservation status of sharks”, said Domingo.