SEAFOOD.COM NEWS by John Sackton – March 2, 2010- Dick Gutting reported yesterday in a special Urner Barry trade alert that the U. S. State Department has decided to decertify Mexico under the U. S. regulations that require all wild shrimp imports to comply with U. S. turtle protection requirements. 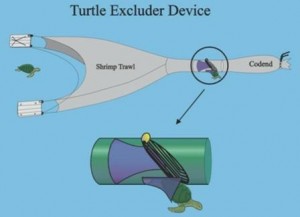 Diagram of a TED inside a shrimp trawl net

US Inspectors found that some Mexican shrimp vessels were not using the required Turtle Excluder devices. (See seafood.com news Feb 26) Sources say the violations were from the West Coast of Mexico and the Sea of Cortez. Mexico has a sufficient legal framework with regulations requiring the use of TED’s, but apparently enforcement was the issue that concerned the inspectors. The list of countries certified and decertified under turtle excluder rules is published annually by the U. S. State Department. Normally it is not very controversial, as countries that are not certified can get reinspected and reinstated. For example, Honduras was decertified a few years ago, and re-instated four months later. But in the case of Mexico, there are potential problems with recertification due to the Mexican shrimp seasons. Very little harvesting is done between April and September, meaning there will be little opportunity for re-inspection. This means that the re-inspection may not take place until the fall, which would potentially disrupt some Mexican wild shrimp exports. Farmed shrimp, and shrimp caught in artesenal fisheries that don’t impact turtles, are exempt from the embargo so long as they have the proper certificates for export. The fact that artisenal fisheries are exempted may become an issue, as there are such fisheries in the Sea of Cortez who export product to the U.S.