Millions of marine turtles have been killed over the past two decades through entrapment in fishing gear, according to a global survey (click here to read full study).

Described as the first global synthesis of existing data, the study found especially high rates of “bycatch” in the Mediterranean and eastern Pacific. Six of the seven sea turtle types are on the Red List of Threatened Species.

Writing in the journal Conservation Letters, researchers advocate much greater use of gear safe for turtles. These include circular hooks rather than the conventional J-shaped hooks on long fishing lines, and hatches that allow the reptiles to escape from trawls. 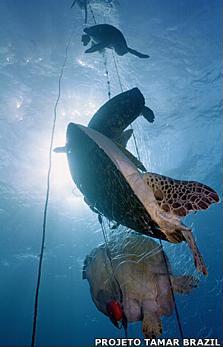 “We conservatively estimate that the true total is probably... in the millions of turtles taken as bycatch in the past two decades” Dr Bryan Wallace

Turtles must come to the surface to breathe. When they are caught in a net or on a fishing hook, they cannot surface, and drown. Lead researcher Bryan Wallace said the state of the world’s turtles was an indicator of the wider health of the oceans. “Sea turtles are sentinel species of how oceans are functioning,” he said. “The impacts that human activities have on them give us an idea as to how those same activities are affecting the oceans on which billions of people around the world depend for their own well-being.”

Dr Wallace works in the global marine division of Conservation International and at Duke University in the US.

The raw material from the study came from records of bycatch – incidental catches in fishing gear – from different regions of the world. Over the period 1990-2008, records showed that more than 85,000 turtles were snared. However, those records covered a tiny proportion of the world’s total fishing fleets. “Because the reports we reviewed typically covered less than 1% of all fleets, with little or no information from small-scale fisheries around the world, we conservatively estimate that the true total is probably not in tens of thousands, but in the millions of turtles taken as bycatch in the past two decades,” said Dr Wallace.

Three types of fishing gear are identified in the survey – long-lines, gillnets and trawls.

Modern long-line boats trail strings of hooks that can be 40km long, usually in search of high-value species such as tuna and marlin. Gillnets are usually stationary, and use mesh of a set size in an attempt to target certain species of fish.

The researchers suggest that several areas of the world account for particularly high levels of bycatch – the Mediterranean Sea and the eastern Pacific Ocean for all types of gear, together with trawling operations off the west coast of Africa.

Modifying fishing gear can have a dramatic impact on the size of bycatch. Shrimp trawls fitted with turtle excluder devices (TEDs) catch markedly fewer of the reptiles. A grid prevents anything large from entering the back portion of the net, and a hole above the grid allows accidentally snared animals such as turtles to escape. A number of countries now require that shrimp boats must use nets fitted with TEDs.

The circular long-line hooks also reduce bycatch of birds such as albatrosses. However, some fleets have resisted adopting selective gear because fishermen believe it will reduce their catch. In many parts of the developing world, the gear is not available.

Marine turtles face other significant threats. Debris in the oceans, such as plastic bags, can also cause drowning, while development in coastal regions can affect nesting and reproduction. Some turtles are still targeted for meat, and their shells used for tourist souvenirs.

Numbers of adult leatherbacks – the largest species, growing to more than 2m long and capable of journeys that span entire oceans – are thought to have declined by more than 75% between 1982 and 1996.