New research led by researchers at the University of Victoria raises serious concerns about the ability of marine protected areas (MPAs) to effectively protect wide-ranging iconic species, such as sharks and rays. 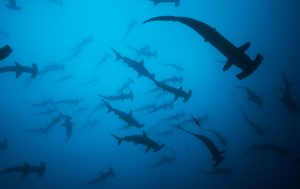 The study, published today in Conservation Biology, investigated 21 years of recordings of shark and ray sightings at Cocos Island, a UNESCO heritage site and marine protected area in Costa Rica.

Cocos is surrounded by an extensive system of coral reefs and seamounts and lies at the confluence of several major oceanic currents, leading to exceptional biodiversity. It is renowned amongst scuba divers as one of the best places in the world to view sharks and rays in large numbers.

But is Cocos a conservation success story or merely a “paper park” where conservation goals are not managed or enforced? To find out, the UVic team and University of Northern Iowa Biology professor Mark Myers crunched numbers from more than 1.4 million shark and ray sightings made during dives led by Undersea Hunter, a local dive company. “In a region lacking fisheries data or dedicated research surveys, the Undersea Hunter dive logs give us a window to see how sharks and rays have changed over two decades in this isolated, globally unique marine reserve” Myers noted.

Results reveal major declines in eight of the reserve’s 12 commonly observed shark and ray species. “The largest species, like hammerheads and manta rays, are simply moving in and out of protected areas as part of their natural migration patterns,” says Easton White, a co-author of the study and a UVic Fulbright student at the time. “We need to think beyond localized protected areas if we are going to curb declines of these wide ranging species.”

Smaller reef-affiliated sharks and rays stay within the protected waters of Cocos Island, so the expectation was that these species would be best protected. Not so, according to the study, which found that, surprisingly, species like the whitetip reef shark and eagle ray are declining inside of Cocos reserve. “These species are likely suffering because of insufficient enforcement of the protected area,” says UVic Biologist and co-author Julia Baum.

“Sharks and rays are paying the price for illegal fishing inside the reserve as well as rampant overfishing outside the reserve, which is ongoing across the eastern tropical Pacific,” she says.