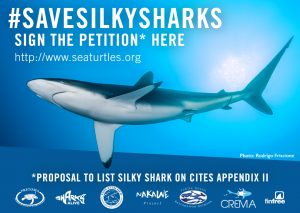 The silky shark (Carcharhinus falciformis) needs your help. Strengthen Global Protections for Silky Sharks. Getting its name from its smooth skin and slim body, the silky shark is an important apex predator that helps maintain the health and productivity of our ocean ecosystems.

Unfortunately, due to overfishing primarily from longliners and purse seiners that target tuna and mahi mahi, these animals are now listed near threatened globally by the IUCN Red List, with some populations in the more precarious vulnerable category.

Sign our petition calling on the Presidents of Costa Rica, Guatemala, El Salvador, and Nicaragua to support listing silky sharks, under Appendix II of CITES (Convention on the International Trade in Endangered Species of Wild Fauna and Flora). If silkies gain this status, countries will be required to take concrete action to reverse the negative population trend and begin protecting this shark species.