Silky sharks have been swimming in the world’s tropical oceans for 3.5 million years. But now they are getting hammered by industrial fishing and moving towards extinction.

Tuna and mahi mahi longliners set lines up to 60 miles long with thousands of baited hooks that kill tons of marine wildlife – including the beleaguered silky shark.

Can you sign my petition calling on the Presidents of Costa Rica and Taiwan to support a proposal at an international fishing meeting to help protect silky sharks from longlining? 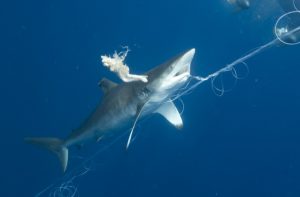 A silky shark caught on a longline. Credit:
Cristiano Paoli

We need to raise our voices now — the meeting ends next week.Public pressure will shine a light on this destructive fishery.

If the proposal passes we can close the silky shark fishery for three months out of the year, an ecosystem-based solution that would save not only silky sharks, but an array of shark species, sea turtles (including the Critically Endangered Leatherback), and even overfished mahi mahi.

Please sign my petition today so I can deliver it in person to the Costa Rican and Taiwanese representatives before the crucial vote.

Facts About Silky Sharks:
-They get their name from their smooth skin and slim body.

-The European Union proposal at Inter-American Tropical Tuna Commission would institute three-month closures and gear improvements to reduce the capture of silky sharks and allow this species some room to recover.