The scalloped hammerhead shark (Sphyrna lewini) known in spanish as “Cornuda”, belongs to the Family Sphyrnidae. Its most destinguished characteristic is its hammer shaped head. We include here some aditional information of this species.

New born and juveniles spend the first stages of its life on coastal habitats like bays and estuaries. Adults grouped in schools around sea mounts and oceanic islands. Highly migartory in tropical and subtropical waters. Regular size 429 cm., Catched by the demersal longline fisheries, with individuals from 80 to 120 cm. Viviparous hosting 10 to 30 embryos.

Frequently catched but in low quantities. Adults trapped by pelagic longliners, females catched by gill nets when they visit coastal waters to give birth to its breeding. Juveniles catched by trawl and gill nets.

Meat of the juveniles marketed as “cornuda rozada” and “bolillo” for the national consumption. Adults meat usually used as bait. Fins, liver and skin are also used for the international market. Fins are national and internationally marketed as “grey shark” fins. 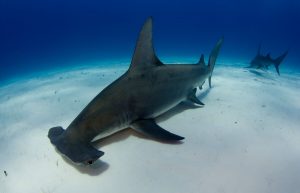 The Smoot Hammerhead Shark is a Pelagic species. Ocurrs between 0 and 20 meters deep, but it can also be fouded  between 0 and 200 meters.  Inhabits coastal areas and oceanic areas as well , in temperate and tropical waters of the  Indian Ocean, the eastern Atlantic and the western Atlantic, including the Mediterranean Sea, and in the Pacific Ocean. Main prays for this species are squids and teleost fishes such as mackarel and jacks, but they also feed on crustaceans, other sharks and rays.

Considered as Commercial by the FAO. Catched incedentally by gillnets and longline fisheries.

The smooth hammerhead is rarely fished intentionally, but may be used for its liver oil in vitamins, its fins for shark fin soup in Asia, its hide for leather and the carcass is used as fishmeal It forms part of accidental catch in gillnet, longline and driftnet fishing operations but, as the fins are prized in Asia, it is rarely released alive when caught.

The smooth hammerhead is classified as Vulnerable (VU) on the IUCN Red List. It is also included in the Appendix II of CITES.