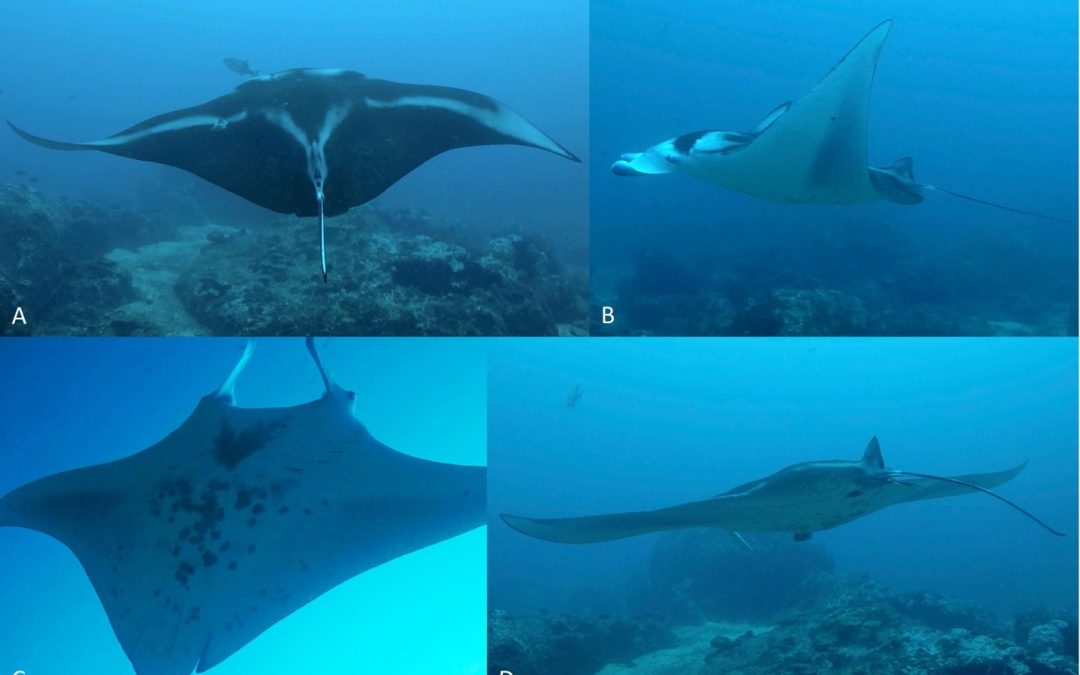 A pregnant reef manta ray was encountered for the first time at the remote Cocos Island in the Eastern Tropical Pacific, challenging our current understanding of this threatened species, which is usually known to roam coastal waters. An international team of marine biologists published their report today.

Reef manta rays (Mobula alfredi), which grow up to 5 m, tend to be residential and are often found in shallow habitats where they are cleaned by reef fish or mate. Giant manta rays (Mobula birostris), on the other hand, have been recorded traveling vast distances and diving over 1000 m deep. It still remains a mystery how manta rays navigate the open ocean and what motives their long-distance movements.

The 3.5 m reef manta reported in this study was seen in the waters off Cocos Island (Costa Rica), nearly 6000 km east from the nearest confirmed sighting location in the Marquesas Islands in French Polynesia and would represent the longest recorded straight-line distance traveled by any species of manta ray. It is also the first confirmed sighting of reef manta on either side of the American continent.

Randall Arauz of Fins Attached said: “Reef mantas may travel several hundred kilometers, although they tend not to travel too far offshore. It is unclear how this individual could have steered so far off course, leading us to assume it was not intentional.”

“The manta was close to the bottom swimming slowly against the current with its cephalic lobes fully extended, although it was not feeding at the time. When I saw her markings and pigmentation patterns, I knew that this manta was different from the ones we usually encounter in the region”, added Dr Mauricio Hoyos, who filmed the manta during a scientific dive in the national park.

The marine biologists uploaded photographs of the ray’s unique belly spot pattern to Manta Matcher, a global online database which includes contributions from ‘citizen scientists’, and compared them to more than 2800 registers from the Pacific.

Dr Andrea Marshall, co-founder and principal scientist at the Marine Megafauna Foundation said about the discovery: “I have been studying mantas for 16 years and they still constantly surprise me. This extraordinary sighting challenges everything we currently know about the migratory behavior of this species and its ability to undertake long-distance movements across open ocean environments.”

Interestingly, the reef manta was pregnant when observed in September 2018. Manta rays give birth to a single pup every 2-5 years, making them one of the slowest reproducing shark and ray species in the world. To date, no one has ever witnessed a manta ray give birth in the wild.

“If it hasn’t already happened, there is a possibility that this manta will give birth in Cocos Island”, Arauz commented.

The team fitted the manta with an acoustic tag, which can stay on for months, even years, logging the animals’ presence every time it comes past one of the listening stations placed around the island. Initial data revealed she has remained in the area.  Listening stations deployed around other Eastern Tropical Pacific Islands, like Malpelo (Colombia) or the Galapagos (Ecuador), will alert the researchers if she travels to either of these sites.

Marshall concluded: “It will be interesting to monitor her over the coming months and see how she uses this new, unfamiliar habitat. If she adjusts well to the conditions, it begs the question: why do reef mantas not ordinarily live in this part of the ocean? While unlikely, we also cannot ignore the possibility that small populations of reef mantas may in fact exist in the Eastern Pacific and have just gone undetected.”

“Perhaps most importantly, this research also provides tantalizing clues to how reef mantas may have so prolifically colonized the remote islands and archipelagos of the Indian Ocean and South Pacific.”