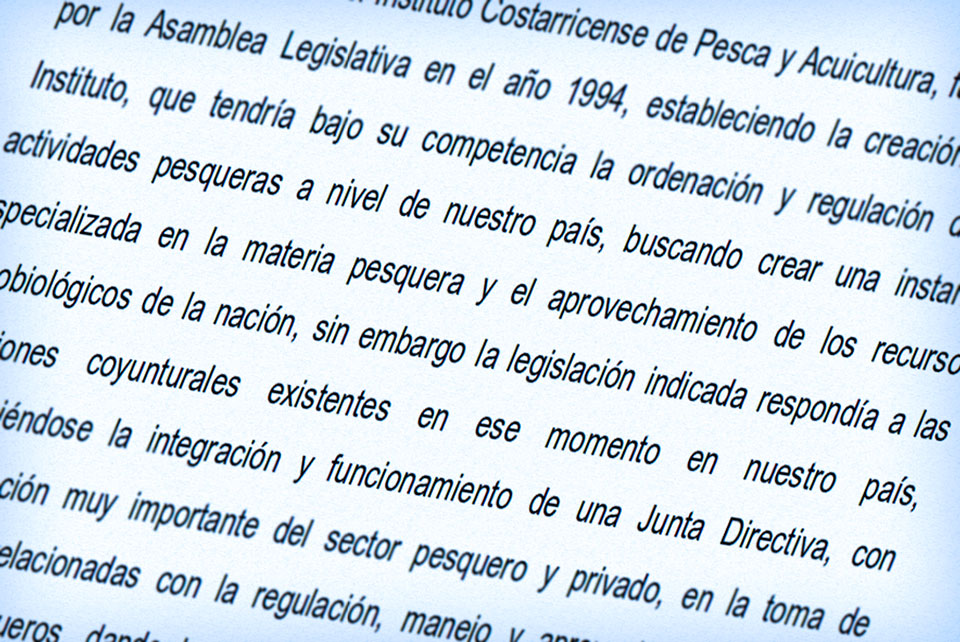 Proposal includes definitive elimination of Board of Directors

Last March 25th, Costa Rica’s President Laura Chinchilla sent a bill to the Legislative Assembly titled “Law to modify various articles of the Law of Creation of the Costa Rican Fisheries and Aquaculture Institute N° 7384”, which proposes that the Executive President of the Costa Rican Fisheries Institute (INCOPESCA) be appointed by the government´s Ministerial Council, in addition to creating the positions of Manager and Auditor, while eliminating its Board of Directors. http://www.pretoma.org/?attachment_id=3930

The Front For Our Seas (www.salvemosnuestrosmares.com), a coalition of non-governmental organizations that has lobbied President Laura Chinchilla since November 2011 for her to send a bill to reform INCOPESCA, celebrates this news and calls on all Congressmen and women to immediately approve it, and thus direct national fisheries policy down the path of sustainable fishing that guarantees the public´s interest.

“In Costa Rica, marine conservation is booming, with shrimp trawl bans, the creation of marine protected areas, and proposals for tuna fishing regulations”, informed Andrés Jimenez of The Front For Our Seas.  “Notwithstanding, without the anxiously awaited INCOPESCA reform bill and the elimination of its Board, it will be impossible to move these agendas forward”, he stated.

“This is the chance to put an end to the capricious fisheries policies that have done so much damage to marine biodiversity and the Costa Rican society ever since INCOPESCA was created in 1995”, expressed Randall Arauz of Pretoma, a member organization of the Front For Our Seas.  “It’s impossible to talk about any form of sustainable fishing without INCOPESCA’s reform, the fishery policies of which have always been based on the private interests of its Board members, in detriment of the public interest and of the much more vulnerable artisinal fishery sector, ” added Arauz.

“We want to sincerely thank President Laura Chinchilla for making this brave decision despite the furry of opposition that came her way from interests that contradict the common good”, informed Javier Rodríguez of the Promar Foundation and Front For Our Seas coordinator.  We would also like to thank the Costa Rican people for their massive support and to remind them to be vigilant as the bill must still be approved by the Legislative Assembly”, noted Rodríguez.

Notes to the Editor:

The Front For Our Seas (FPNM in Spanish) is a group of public interest organizations that work to improve marine administration through a series of legal, scientific, and political strategies, and through the public movement for improved marine resource management.  It promotes INCOPESCA’s reform on the grounds that it responds to the objectives upon which it was created: the public interest and the sustainable use of fisheries resources.

FPNM is made up of five non-governmental organizations, Pretoma, Foundación Keto, Fundación Promar, International Student Volunteers Inc., and The Leatherback Trust, in addition to associated individuals interested in being a part of FPNM’s educational, environmental, and coastal community capacity building projects in research, conservation, and marine defense.