A group of marine scientists has launched a new international organization called MigraMar, dedicated to studying and conserving migratory marine species in the Eastern Pacific Ocean. The organization has filed papers to incorporate in California, hired an executive director, and nominated four scientists to serve as its founding Board. The mission of MigraMar is to carry out the scientific research needed to safeguard healthy populations of highly migratory species in the Eastern Pacific.

The decision to create a new organization followed more than a year of strategic planning meetings held in Ecuador, Panama and Colombia with initial funding provided by the Helmsley Charitable Trust, and assistance from the non-profit organization, Costa Rica Forever and PACIFICO. The Helmsley Charitable Trust has also committed initial three year funding of $455,700 to cover the expenses of incorporation, hiring an executive director and supporting research and policy initiatives.

Specifically, MigraMar was created to influence policies in our respective countries and in regional and global fora to safeguard highly-migratory species; develop shared projects and collaborative transboundary research to increase our understanding of the biology and ecology of highly migratory species; build the capacity of the next generation of scientists in our countries by providing training programs, mentoring opportunities, and support for aligned research; and serve as a platform to promote, fund and coordinate these activities.

The MigraMar founding incorporating Board members are:

President of the Board, Dr. James Ketchum commented, “Dr. Chassot is a dynamic, highly motivated and passionate conservation practitioner, with high standards of personal and professional excellence, and we are confident he can help build this new organization into the preeminent regional conservation research institution focused on conserving migratory species through research and policy initiatives”. 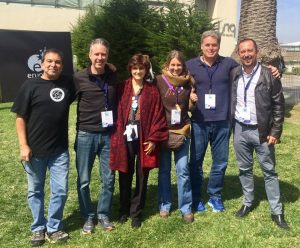 Randall Arauz, Costa Rican biologist and Migramar cofounder, had the following to say, “This is an excellent platform that will define policy and practices that protect and conserve migratory shark and sea turtle species. Migramar is made-up of experts with an enormous amount of experience in the field of marine research and because of this structure it will provide a new opportunity to protect highly migratory species at both the local and regional levels”.

To learn more about MigraMar visit their newly launched website at http://migramar.org.