San José, May 10, 2017. On May 4th an executive order was published modifying the procedures used to authorize shark fin exports from endangered and threatened species. The order designates the Costa Rican Fisheries and Aquaculture Institute (INCOPESCA) as the entity responsible for indicating to the Ministry of Agriculture and Livestock (MAG) whether or not fins from these species will be permitted to enter foreign markets. 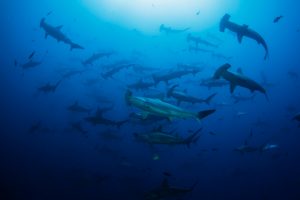 The order eliminates the participation of scientific experts from non-governmental organizations (NGOs), academia, and the Ministry of the Environment and Energy (MINAE), and it leaves the decision making process up to INCOPESCA and its private fishing interest driven board of directors.

“This presidential initiative stems from the government’s commitments to the fishing sector and its pledge to allow the export of hammer head shark fins, as well as its frustration with the numbers of national scientists who oppose this commercialization”, said Randall Arauz from the research and conservation organization Fins Attached.

The CITES Convention is an international agreement, of which Costa Rica is a member, that protects the over exploitation of threatened species of plants and animals through the regulation of their international commerce. CITES requires that both scientific and administrative entities decide whether or not to issue a Non-Detriment Finding, permitting or not permitting the export of species listed in the Convention. Until last Thursday, the administrative entity was the National System of Conservation Areas (SINAC) and the scientific entity was the Representative Scientific Authority Council (CRAC-CITES). CRAC-CITES was made-up of state universities, INCOPESCA, SENASA, the fishing sector, and NGO representatives. Because of the new executive order, the export of all endangered fish species will be regulated by INCOPESCA and MAG.

In 2015 the government modified the structure of CRAC-CITES in order to include representatives from the fishing sector. But even with the fishing sector included in the decision making process, CRAC-CITES ruled in April to maintain the ban on hammer head shark fin exports, ruling that the international commerce of these animals puts their survival in jeopardy.

In reaction to CRAC-CITES’s decision, the long-line fishing sector staged a national protest on May 2 that lead to the government’s willingness to negotiate. Soon thereafter the fishing sector suspending its protest and a week later the executive order was released.

According to Jorge Jiménez, director of the MarViva Foundation, “This shameful change represents a huge loss for the protection of endangered marine species and for the participation of civil society. Regulations are manipulated for the convenience of one group’s economic interests, therefor superseding the collective interests for the conservation of the environment. The preservation of endangered species should not be in the hands of INCOPESCA, an entity that has been questioned for its irresponsible management of our fisheries resources.”

We insist that the well-being of the most vulnerable marine species not be placed in the hands of a board of managers from an institution run by private fishing interests, that the spirit of the CITES Convention be respected, and that its conservation measures be returned to MINAE.