Massive global call on President Alvarado of Costa Rica to save sharks. 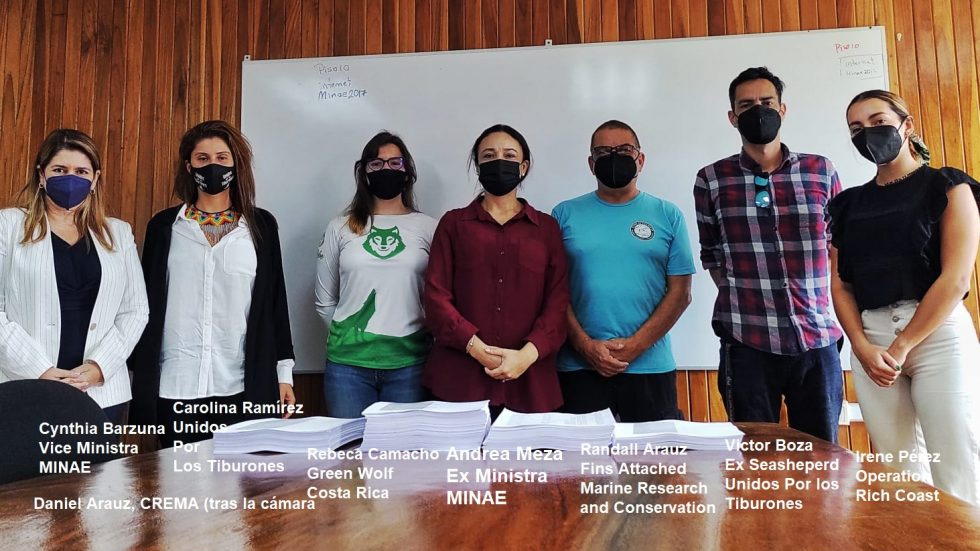 177,320 global citizens call for the protection of threatened shark species in Costa Rica.

The Costa Rican coalition United for Sharks delivered a package last April 1 to the former Minister of Environment, Andrea Meza Murillo, containing more than 100,000 signatures from global citizens calling on President Alvarado to protect threatened shark species as wildlife, instead of commercial species as they are considered today.  This is the third delivery of signatures in support of a global petition that started in March of 2019, and now adds up to 177,320 supporters.  The campaign was joined by the US based non-profit organization Only One in March 2021, as well as 91 marine conservation nonprofits from all over the world.

The signatories request that the protection of threatened shark species be guaranteed through the Wildlife Conservation Law (WCL), which bans the extraction of wildlife (Article 14c) and restricts the exportation of products sourced from species protected by the Convention on the International Trade in Endangered Species of Wild Fauna and Flora (CITES) (Article 75).  The commerce of threatened shark species in Costa Rica is currently operated without any quotas or size restrictions (despite a minimum size mandate), and it constitutes 40% of Costa Rica’s longline fishery production.  This has been the case since May 17, 2017, when the Executive Branch established that sharks would no longer be considered wildlife protected under the WCS, but rather commercial species protected under the Fishery Law (Decree 40379).

The only regulation upon the commercialization of threatened shark species in Costa Rica is a prohibition to export hammerhead shark products, which dates to March 1, 2015.  Nevertheless, no restriction exists whatsoever for its catch nor the commercialization of its products.  “This is how 32,027 specimens of this critically endangered species have since been sacrificed and 14 tons of its fins domestically commercialized,” denounced Sandy Schmidt, of the Costa Rican organization Operation Rich Coast, and member of the coalition United for Sharks.  “Quite evidently, a lot more must be done to save this species from extinction,” said Schmidt.

A high degree of uncertainty exists around this issue, as threatened shark species are currently listed as both species of commercial interest by the Costa Rican Fisheries Institute (AJDIP/290-2017, 13 de Julio del 2017) and as endangered species of marine wildlife by the National System of Protected Areas (R-SINAC-CONAC-008-2021, 17 de mayo del 2021).  “We need the President to clear out this situation as soon as possible,” explained Carolina Ramírez of the coalition United for Sharks.  “It is only under the protection of the WCL that it will be possible to promulgate effective conservation legislation for threatened sharks.”

According to Ellian Villalobos, of the organization Green Wolf Costa Rica, threatened shark species must enjoy the protection of the WCL, to halt the detriment to the population and start the recovery of their populations.  “For a country like Costa Rica, with a marine territory 11 times larger than its continental space, the priority should be to ensure that the ocean may continue to provide the ecosystem services we need, such as food security and adaptation to climate change, and you need sharks for that,” remarked Villalobos.

“President Alvarado recently signed a major expansion of Costa Rica´s marine protected areas, but without a ban on the commercialization of threatened shark species, sharks that stray from protected areas remain dangerously at risk,” pointed out Cristina Mittenmeir, President and Co-Founder of the Only One Collective.  “This is an incredible moment for President Alvarado to build on past progress and create a more abundant ocean for people and the planet,” said Mittermeir.

“Costa Rica made us proud when it led the process to attain international protection for hammerhead sharks at CITES in 2013, and now it can lead regional and global processes to ensure the protection of other threatened shark species, such as silky sharks and thresher sharks,” said Randall Arauz, of the US based Fins Attached Marine Research and Conservation.  “President Alvarado can start by setting the example and granting the full protection to these species that they deserve and so badly need right here at home, strengthening the country’s natural leadership for the adoption of these policies at international forums,” said a hopeful Arauz.