On November 9, 2017 the marine research yacht “Shark Water” will be docked in Puntarenas, Costa Rica.  Visitors and press are invited to stop by and visit the boat at 10:00 am at the tourism pier (muelle turístico). 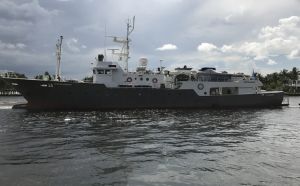 The “Shark Water”, a 40 meter yacht refitted to facilitate the biological research of highly migratory sharks and other marine fauna in the Eastern Pacific, is owned by the Colorado, United States based non-profit Fins Attached Marine Research and Conservation (Fins Attached).  https://finsattached.org/my-sharkwater/

Fins Attached has worked for years to promote shark research in the Eastern Pacific in close collaboration with international donors and local researchers.  As a result of this model, scientific information has been produced relevant to the development of highly migratory marine resource conservation and management policy in political forums across the region.  With the recent acquisition of “Shark Water”, Fins Attached hopes to increase its presence and collaboration among researchers in the area.

“One of the biggest obstacles that we as local researches face in order to carry out scientific research in places like Cocos Island, Costa Rica in the difficulty of just getting there, let alone the high costs associated with diving expeditions and research equipment”, said Randall Arauz, Political Advisor for Fins Attached who has studied sharks at Cocos Island since 2005.  “Now when we talk about creating “migration ways” not only between Eastern Pacific Islands but also between these islands and pupping areas in coastal zones, the Shark Water can be highly relevant when it comes to successfully generating the science necessary to justify adequate protection policy.”

“We invite the Costa Rican press and the general public to visit the Shark Water and learn more about our ambitious plans”, said an enthusiastic Alex Antoniou, Director of Fins Attached.  We’ve collaborated for years with Cocos Island shark research activities, and we now hope to be even more involved not only in the research but in the effective conservation of this precious Costa Rican treasure as well”.