San Jose, Costa Rica (March 20, 2015) – A green turtle (Chelonia mydas) that was tagged in Cocos Island National Park travelled more than 310 miles in 21 days to seek refuge in the Golfo Dulce of Costa Rica, demonstrating possible biological connectivity between these two important marine ecosystems. The finding, which has implications for national marine spatial planning as well as the definition of regional marine conservation policy, was possible thanks to the collaboration of Costa Rican organizations Misión Tiburón and the Sea Turtle Restoration Program (PRETOMA), and the U.S. based organization, Turtle Island Restoration Network. 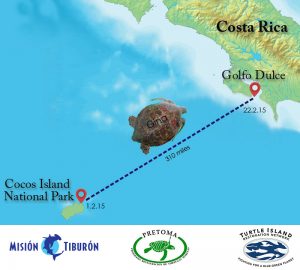 This particular sea turtle is a juvenile, and quite a bit of recorded history already exists on its movements. The turtle was first captured in Cocos Island on March 15 of 2011 by a team of PRETOMA-Turtle Island researchers, who decided to name the turtle “Gina.” The turtle was recaptured on May 28 of 2014 and she was equipped with an acoustic transmitter tag. Researchers from Misión Tiburón, who are studying the movements of sharks in Cocos Island and Golfo Dulce using the same acoustic technology, detected Gina for the last time in Wafer Bay, Cocos Island last February 1. Only 21 days later, on Feb. 22nd, Misión Tiburón detected Gina in the mouth of the Plantaneres River, Golfo Dulce, over 310 miles away, implying a fast and directed movement.

Whilst several green turtles equipped with satellite transmitters in Cocos Island National park have been tracked migrating towards the coast of Central America, Gina is the first turtle to be detected in another feeding ground, and her track connects Cocos Island’s oceanic habitats directly with coastal ecosystems. Juvenile green turtles like Gina need to reside for a number of years in safe, sheltered places that provide sufficient food and allow them to grow and reach sexual maturity. In contrast to Cocos Island, the Golfo Dulce has important patches of sea grasses that probably constitute the base of the green turtle’s diet.

“According to genetic analysis, Gina originally comes from the Western Pacific, and she had been residing in Cocos Island for the last few years, ” explained Maike Heidemeyer of PRETOMA. “Gina’s recent migration to the Golfo Dulce is exciting, as it connects not only Costa Rican marine foraging sites, it also provides evidence of transpacific connectivity of marine turtle habitats.”

“A common trait among many highly migratory species is that they spend part of their life cycles in these critical coastal habitats, where they are subject to a series of anthropogenic threats such as fisheries, pollution and the destruction of habitat”, commented a concerned Ilena Zanelo of Misión Tiburón. “This information, which is generated as a result of inter institutional efforts and coordination, is valuable for the establishment of effective marine conservation policy in the framework of the Eastern Tropical Pacific Marine Corridor.

“Our mission is to use this scientific data to understand sea turtle’s migratory routes and then advocate for protected swimways to ensure that these endangered species are not victims of industrial fishing practices like longlining,” said Todd Steiner, ecologist and executive director of Turtle Island Restoration Network. “We are excited to see that Gina made her migration safely.”

Green turtles (Chelonia mydas) are listed as Endangered by the IUCN.  The species is listed under Appendix I of the Convention on the International Trade of Endangered Species (CITES) and the Convention of Migratory Species (CMS).  The capture and commercialization of green turtle products products and subproducts is strictly banned by Costa Rican legislation. The construction of a mega sports fishing marina in the Golfo Dulce, specifically in Puerto Jiménez, threatens to interrupt or alter the migratory route green turtle like Gina must follow when heading towards the sea grass pastures upon which they feed.

Pictures and videos of Gina, and a maps showing her route are available to the media via dropbox by clicking here.

Misión Tiburón is a non-governmental organization and Costa Rican nonprofit, which aims to promote research, management and conservation of sharks.