As of March 1, 2015 hammerhead fin exports are banned

Smalley Development S.A. intends to export 690 kilos of hammerhead shark fins, the international trade of which has been banned in Costa Rica in abidance to the international convention that regulates the trade of endangered species (CITES). The request was presented last August 5 to the National System of Conservation Areas (SINAC), Costa Rica’s CITES administrative authority, and submitted on August 10 to the CITES Board of Scientific Authority Representatives (CRACCITES) for approval. 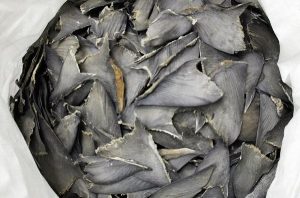 Costa Rica’s Wildlife Conservation Law requires these exports to be approved by the national scientific authority (in this case CRACCITES), a decision that must be based on the premise that the extraction animals from their natural state to supply the international trade demand does not result in biological detriment of the species’ population. The requested shipment of hammerhead shark fins was stockpiled from May to September of 2015, during a time period beginning on March 1, 2015, in which SINAC banned the exportation of hammerhead shark products.

“There is no scientific evidence whatsoever showing that hammerhead shark populations have recovered so as to justify the renewed international trade of these animals,” said Andy Bystrom from the Costa Rican organization CREMA. “On the contrary, out of the five distinct global hammerhead populations, the Eastern Tropical Pacific population (our region) is the most threatened, a direct impact of the shark fin trade and the lack of governmental control in the region.”

“How could it be sustainable, much less moral, to export shipments of endangered hammerhead shark fins during a time period when they were banned?”, said Randall Arauz from the international marine conservation organization Fins Attached. “The measure was designed to precisely discourage the extraction of hammerhead sharks, otherwise destined for the Asian market, which would allow for population recovery, because of which this exportation request represents nothing more than mockery of CITES and its intention to regulate the international trade of endangered species, not to mention what it would do to our international image if approved,” warned Arauz.

“We are calling on CRACCITES to reject this request, in light of the best available science and existing national legislation”, said Regi Domingo of the Spanish organization Nakawe Project and CREMA consultant. “Furthermore, if Costa Rica wants to improve its conservation strategies, the country should adopt measures that reduce hammerhead shark mortality, such as spatial/temporal closures along migratory routes and in reproductive zones, and strict implementation of minimum size limits, among other strategies,” recommended Domingo.

The Center for the Rescue of Endangered Marine Animals CREMA (www.cremacr.org) is a Costa Rican based marine conservation and research organization working to protect ocean resources and promote sustainable fisheries policies.