Decision taken after opposite position statements were issued by Vice Ministry of Oceans and the Costa Rican Fisheries Institute.

The Minister of Environment of Costa Rica, Edgar Gutiérrez, announced today that the country would support the listing of all proposed shark and ray species under the Memorandum of Understanding (MoU) of Migratory Sharks, during the 2nd Meeting of Signatories (MoSII) to be held in San José, Costa Rica, next April 15-19. 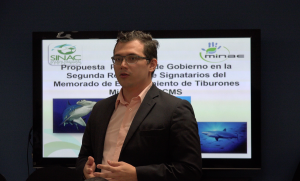 Fernando MoraVice Ministry of Oceans supporting the listings, last 26th January 2016, in the Aunditorium of MINAE.

The announcement came after the Minister of Environment carefully studied two opposite position statements issued last week, one by the Vice Ministry of Oceans supporting the listings, and another by the Costa Rican Fisheries Institute, vehemently opposed.  According to Minister Gutiérrez, “Our objective when taking this decisión is to guarantee a favorable state of conservation for all species considered, in such a way that a sustainable use is made of these resources, which act as the cornerstone that balances ecosystems and fisheries”.

“We have been supportive of the Vice Minister of Ocean’s position from the very beggining, and we are glad that this position prevailed”, said a satisfied Randall Arauz, of the Costa Rican organization PRETOMA.  “Now is the time to act, and instruments such as the MoU Migratory Sharks provide the tools to improve regional and global conservation for these highly migratory and endangered species”.