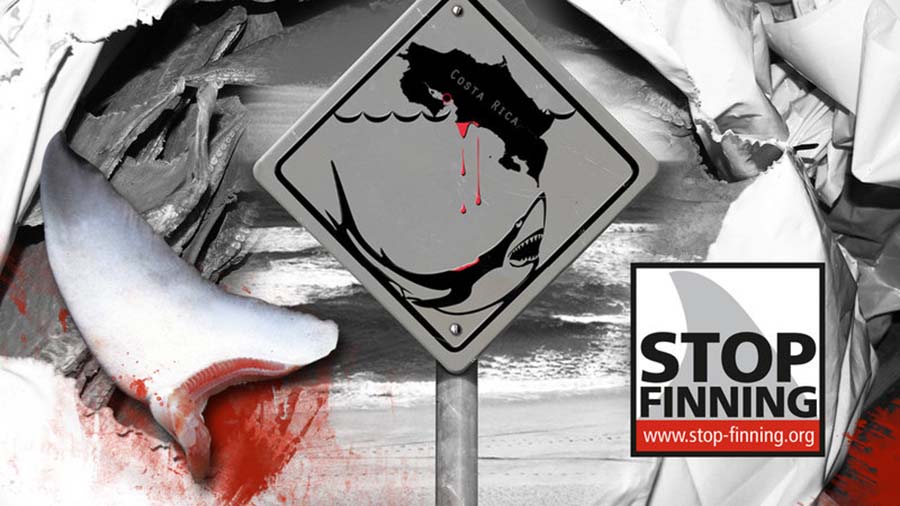 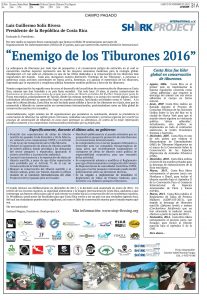 The President of Costa Rica, Luis Guillermo Solís, was nominated to recieve the international award “Shark Enemy of the Year 2016”. The award is granted by the international organization Sharkproject e.V., to governments, companies, or individuals, whose actions threaten the global survival of sharks.

On this occasion, 30 Costa Rican, regional, and international NGOs announced their nomination of President Solís for the Shark Enemy 2016 award, through a full page add published this monday in La Nación, one of Costa Rica’s main newspapers.

The award was first conceived in 2003 when Sharkproject developed the idea to globally recognize positive and negative actions affecting the protection of sharks due to the drastic reduction of their populations globally during the last 50 years.

The organizations based their decision on a series of negative decisions made by President Solis´ government. Among these was the September decision to no longer support or propose the inclusion of additional shark species in international conventions.

In addition, Solis’ government yielded to the fishing sector´s and exporter´s demands and declared that the export of hammerhead shark fins is of public interest, thus ignoring scientific evaluations and environmental protection strategies.

The decision to allow two international shipments of hammerhead shark fins on December 24, 2014 and February 20, 2015 has also received criticism because of their disregard to the Convention on International Trade in Endangered Species of Wild Fauna and Flora (CITES) and the Wildlife Conservation Law.

Along the same lines, the President responded to the shark fishery´s pressure by intervening against and ultimately overturning air shipping companies´ recent decisions to suspend the transport of shark fins as part of their environmental responsibility policies.

Backsliding on the country´s conservation actions

The European organization has kept a close eye on the country´s conservation actions on this subject and is deeply concerned by the grave backsliding it has demonstrated over the last few years.

Among the positive outcomes, in 2006 Costa Rica became the first country to implement the ¨fins attached¨ regulation that requires that fins be naturally attached to the body at the time of landing. In 2010 the country ordered the closure of private docks that allowed foreign shark fishing vessels to land their catch. Furthermore, Costa Rica has championed the inclusion of more species, like the hammerhead shark, in Appendix II of CITES.

But Luis Guillermo Solís took a step back from these policies. Sharkproject was sorry to hear about this change of political course. ¨We are very worried because Costa Rica has demonstrated a definitive digression in shark conservation¨, said Gerherd Wegner, president of Sharkproject Germany. ¨We hope that President Solís will take responsibility for his actions because it´s what his people and the world expect of him¨, he added.

Among the local organizations that nominated Solís are Pretoma, MarViva Foundation, Preserve Planet, the Costa Rican Federation for Environmental Conservation, Keto Foundation, and UESPRA. In addition, the international organizations included in the nomination are Sea Shepherd, Vivazul from El Salvador, ARCAS from Guatemala, Equilibrio Azul from Ecuador, and Animal Welfare Institute from the USA, among others.

Sharkproject will begin its analysis in December and in January of next year it will announce the award winner. The ¨2015 Shark Enemy¨ award was given to the Spanish company Productos Pesqueros Gallegos SL.