Endangered Hawksbill sea turtle is freed after 4 months of rehabilitation 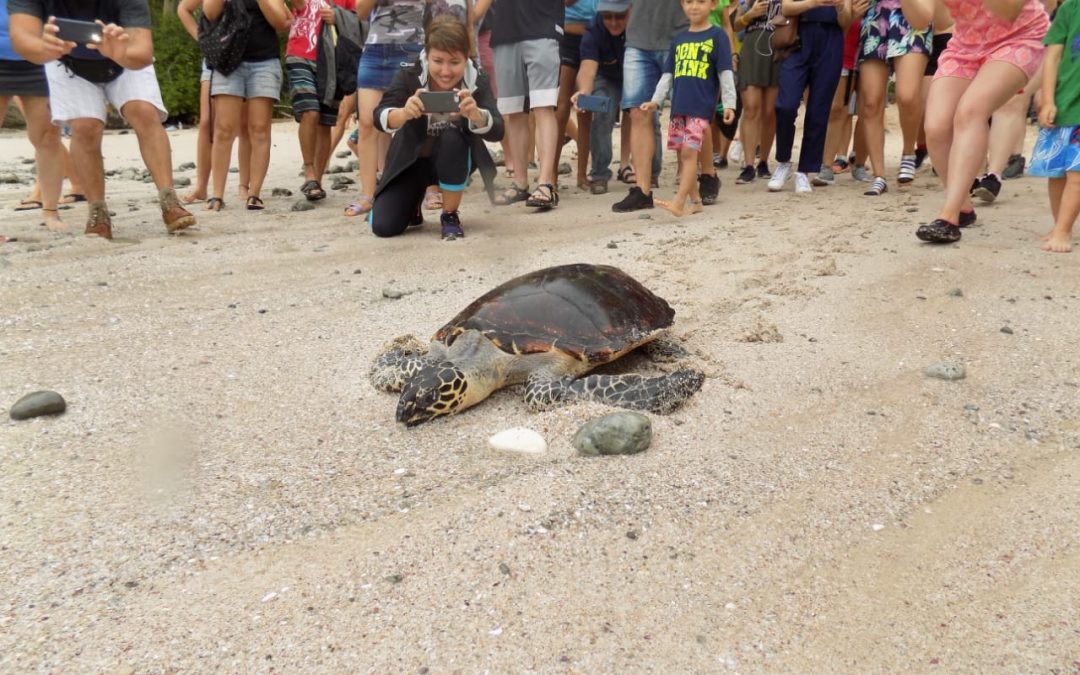 Endangered Hawksbill sea turtle is freed after 4 months of rehabilitation

Two hooks were found inside her throat

The hawksbill turtle, christened “Hook”, was rescued by members of the Endangered Marine Species Rescue Center (CREMA-Costa Rica), las January.  The team of researchers was in the middle of their field work studying the turtles in the tide pools that are formed in the rocky reefs of Playa Los Suecos, Malpaís, with their collaborator and partner in science Iguana Divers S.A., a local dive company.

The state of the turtle, weak and underweight, alerted the researchers that something was wrong.  A more careful inspection led to the detection of two fishing hooks imbedded in her throat.  “Hook” was immediately transported to the Centro de Rescate y Rehabilitación del Animales Marinos (CRRAM) of the Parque Marino del Pacífico in Puntarenas, where staff determined a surgically intervention was needed.

According to Esteban Rudín, veterinarian doctor with CRRAM, “Once the animal had been stabilized, we proceeded with the surgery. The turtle had a hook imbedded in its throat, as well as the remains of a second hook.  Fortunately we extracted both of them successfully, and after a recover of four months, the turtle is ready to be freed.”

Hawksbill sea turtles (Eretmochelys imbricata) are catalogued as critically endangered.  Incidental capture during commercial fishery operations and poaching of adults to elaborate trinkets out of their shells, are pointed out as the culprits leading to this condition.  It has recently been discovered that the rocky reefs of Pacific Costa Rica, like the ones where the tide pools are formed in Playa Los Suecos, are important feeding grounds for juvenile hawksbill sea turtles.

“We monitor hawksbill sea turtle activity along the southern Nicoya Peninsula on a monthly basis”, explained Daniel Arauz, researcher with CREMA and head of this project.  “Hook” was equipped with an acoustic transmitter, which can be detected by one of several listening stations that have been deployed in the rocky reefs of the area.  “Knowledge on the use these turtles make of these reefs, and the time they stay in these feeding grounds, will allow us to make informed conservation and management recommendations to the authorities”, added Arauz.

The protection of these feeding grounds is paramount for the conservation of hawksbill turtles, expressed Juan Pinto of Iguana Divers S.A.  “We feel that its our duty as a business to collaborate with research that targets the improved knowledge and conservation of this charismatic and emblematic species”, affirmed Pinto.

This research has been conducted by CREMA for two years under the direction of Arauz, and is funded by the Marine Conservation Action Fund of the New England Aquarium, the London Zoological Society’s EDGE Program, and the National Geographic Society, with the collaboration of the Ministerio de Ambiente y Energía (MINAE) and the Parque Marino del Pacífico.

For photos of Hook’s release: