San José, Costa Rica (March 30, 2017) – A global coalition of marine biodiversity conservation organizations submitted a report yesterday to the United States government’s National Oceanic and Atmospheric Administration (NOAA) detailing scientific and commercial information on the population status of oceanic whitetip sharks and the need for their increased protection. The report was submitted as part of NOAA’s call for information to assist its process of developing protective regulations for the species under the Endangered Species Act (ESA). If listed on the ESA, oceanic whitetips would join 2,270 other endangered or threatened species and habitats that are afforded protection by the United States governmentIn December 2016, NOAA Fisheries proposed listing the oceanic whitetip shark (Cacharhinus longimanus) as threatened and put out an immediate call for more information that would strengthen its recommendation. In response to the government’s request, the United States based NGO Fins Attached and the Costa Rican based conservation non-profit CREMA compiled new and rare commercial landing information for the species in Costa Rica as well as evaluated the adequacy of current measures to protect the species. Their research led to a report and list of recommendations, co-sponsored by 30 global NGOs, that conclude that current oceanic whitetip management mechanisms are inadequately designed and implemented and because of this have failed to reverse the species’ decreasing abundance in the Eastern Tropical Pacific. Based on this analysis, the report supports a threatened listing for oceanic whitetip sharks under the ESA and also calls for an endangered listing, implying even stronger protection. 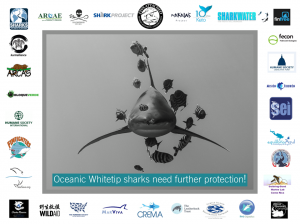 “Current protective measures largely focus on the improvement of data collection and other strategies, leaving fishery effort, and thus fisheries induced mortality, unencumbered,” explained Randall Arauz of Fins Attached and author of the report. “Anything short of policies that lead to an immediate and drastic reduction of fisheries induced mortality will fail to stop the trend towards extinction of the species,” added Arauz.
“We believe the ESA listing would significantly assist with the implementation of certain international trade bans already in place for this species,” said Andy Bystrom of the Costa Rican non-profit ARCAE and report co-sponsor. “Proper enforcement mechanisms, however, must be put in place in US ports to avoid circumvention of the regulation as described in the report.
The Endangered Species Act was signed on December 28, 1973, and provides for the conservation of species that are endangered or threatened throughout all or a significant portion of their range, and the conservation of the ecosystems on which they depend. Of the Act’s 2,270 species, about 650 are foreign species, found only in areas outside of the U.S.
For more information:
Randall Arauz
Policy and Development Specialist
Fins Attached Marine Research and Conservation
rarauz@finsattached.org
+506-8708-8253
Fins Attached, www.finsattached.org conducts research, promotes conservation and provides education for the protection of marine ecosystems. The health of any ecosystem is controlled by its apex predators.
CREMA, www.crema.org is a Costa Rican NGO that works to conserve, manage and restore, populations of endangered marine wildlife.