22 international NGOs and 12,000 individuals from around the world express their concern

February 19, 2018 – San José, Costa Rica
Ten tons of hammerhead shark fins, accumulating in Inversiones Cruz S.A.’s warehouses since March 1, 2015 when the government issued an export ban as part of its obligations to the Convention on International Trade in Endangered Species of Wild Fauna and Flora (CITES), are awaiting export approval from the Costa Rican Fisheries and Aquaculture Institute (INCOPESCA). Twenty two marine conservation NGOs from around the world consider any attempt to export the fins a violation of CITES and therefor a major threat to the survival of hammerhead sharks. Because the fins were obtained during an export ban, these organizations, along with 12,000 individuals from around the world, are petitioning the Costa Rican government to stop any attempts to export them. 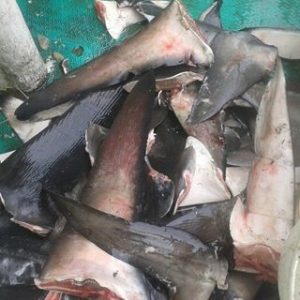 According to CITES regulations, Costa Rica must determine, through scientific studies, if it is possible or not to extract hammerhead sharks from their natural environment without putting the species’ population at risk, or if their international commerce should be banned. On March 1, 2015 Costa Rica’s CITES Scientific Authority Representative Council (CRACCITES) performed these studies and determined that any export of hammerhead fins would be in detriment to the species’ survival according to the country’s Wildlife Conservation Law. In August 2015 and March 2017 CRACCITES reevaluated the issue and again determined that it was not possible to export fins sustainably.

Frustrated with CRACCITES’ analysis and conclusions, the Costa Rican government determined that sharks are not protected under the Wildlife Conservation Law and granted INCOPESCA the authority to undertake its own study, the results of which will be released in March 2018.

“Obviously, INCOPESCA will recommend that fin exports be resumed, despite two panels composed of the country’s best scientists indicating that the activity cannot be done sustainably”, said Randall Arauz from the USA based organization Fins Attached. “Once again, Costa Rica is evading its CITES obligations in order to favor private interests, in this case the shark fin exporter, in detriment to the public’s interest and of course hammerhead sharks”, continued Arauz.

The Costa Rican organization Endangered Marine Species Rescue Center (CREMA) believes that it is incomprehensible that Costa Rica is going through so much trouble to sidestep hammerhead protection strategies when just four years ago the country led the process to grant the species increased international protection through CITES. In order to start protecting hammerheads, Costa Rica must prohibit the export of this 10 ton stockpile of fins, obtained and stored during an export ban.