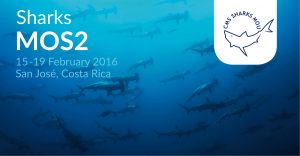 Marine wildlife experts from more than 30 governments, the European Union, U.N. agencies, Regional Fisheries Manaagement Organizations, nonprofits and academics will convene in Costa Rica’s capital next week, February 15-19, to agree on urgent measures to protect shark and rays from extinction. This discussion will take place during an important international convention known as the 2nd Meeting of Signatories of the Memorandum of Understanding of Migratory Sharks developed under the Convention on Migratory Species.

The Memorandum , which has been signed by 38 countries and the EU since 2010, was created to address the worrying downward trend exhibited by global shark and ray populations due to overfishing, destruction of habitats and migratory corridors, or entanglement in and ingestion of marine litter. At the upcoming meeting this February, the particapating countries, experts and organizations will consider listing 22 more shark and ray species under Annex I of the Memorandum. Listed species will gain greater conservation protections in the regions they inhabit, and countries with listed species within their borders will be required to help protect them.

The listing of Hammerhead, silky and thresher sharks is of revelance to Costa Rica. All three species are commonly caught by Costa Rican fishers, and are considered ‘threatened’ by the International Union for the Conservation of Nature’s (IUCN) Red List of Threatened Species.

“Listing of these species under the Memoradum will provide Costa Rica with better tools to promote the regional conservation of these highly migratory species,” said Randall Arauz, International Director of Turtle Island Restoration Network, and President of the Costa Rican organization PRETOMA. “Time area closures along migratory corridors, the declaration of banned species, longline fishery temporary closures, an imposition of minimum catch size regulations…these are all measures that need to be urgently implemented in the Eastern Tropical Pacific region” asserted Arauz.

“We were very satisfied to hear that Costa Rica will support all proposed shark and ray listings,” said an enthusiatic Mauricio Álvarez of the Costa Rican organization FECON. “Several bad decisions, such as allowing the exportation of over 900 kilos of endangered hammerhead shark fins early last year tarnished Costa Rica’s international image as a conservatoin leader, but there will be more opporunities to ammend these past errors in the near future, and why not, maybe even earn President Luis Guillermo Solís a ‘Shark Guardian Award” nomination in the future.”