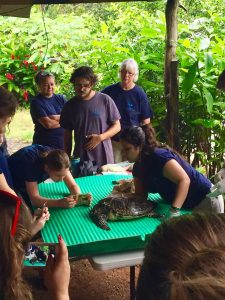 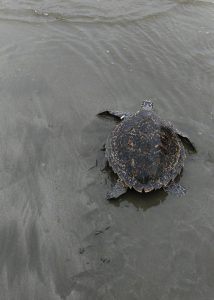 Meet Catherine Carey, a critically endangered Eastern Pacific juvenile hawksbill sea turtle. CREMA works in partnership with the artisanal fisheries community of Punto Coyote to conserve and study the foraging population of hawksbills around the Caletas-Ario National Wildlife Refuge. Catherine was caught last night by local fisherman Amado, who handed her over to our CREMA research team. The young sea turtle was covered in barnacles, which can impede the turtle’s ability to swim and disrupt its carapace development. But she was in good hands with marine biologists Daniela Rojas (Venezuela) and Daniel Arauz (Costa Rica). After getting a freshwater bath to clean off the parasites, Catherine’s ID was recorded through flipper tagging and head profile photos, and morphological measurements were recorded. This data will be used to assess the size and demographic of the group of Hawksbills that use Coyote’s rocky outcrop as a feeding ground, and to develop the area’s conservation strategy in the future. Once Catherine was cleaned off and had time to rest, volunteers from CREMA’s four nesting beach projects came out to the beach to cheer her on as she crawled back to the stormy sea.

Catherine Carey is named in memory of Catherine Poindexter, who worked as a research assistant at the CREMA’s Caletas sea turtle nesting beach conservation project during the fall of 2015. Catherine’s positive spirit and wicked sense of humor was contagious, and kept our team upbeat and laughing – a difficult feat at the remote and rustic Caletas wildlife refuge research station. During her placement, Catherine conducted her capstone university research project and successfully identified ways to improve our sea turtle nest relocation methods, optimizing the hatching success of the Caletas hatchery. As Catherine’s field supervisor, I had been in touch with her after her internship. But I was mildly alarmed last December, when out of the blue I received an email from her with the subject line as “Serious Question”. Upon rushing to open it, the a short messaged popped up:

“It’s not that serious, I was wondering what you threw into the pot when you made beans for us at camp, I’ve tried a couple times and it’s been just the worst. I remember yours were insanely good! Thanks!!” 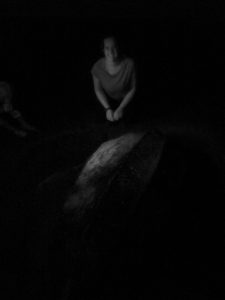 Cath with baula after she nested

It was the perfect example of Catherine’s enthusiastic attitude and sporadic humor, and it brought back some great memories. The secret ingredient to the Caletas beans wasn’t the random herbs and vegetables I’d throw in, but rather the smoke from the fire. It took hours of burning damp driftwood to boil beans, and doing so was a necessary part of cooking food for camp on the isolated Costa Rican wildlife refuge. After full nights of hard work protecting sea turtle nests, it was incredibly satisfying sitting in front of a fire and idly chatting the time away, with the wild Pacific crashing down on our doorstep. It was wonderful way to make friends.

I had the pleasure of conducting one of the my most memorable sea turtle night patrols with Catherine, as we found the first critically endangered leatherback that had been seen nesting at Caletas in 4 years. As soon as we confirmed that we were looking at a massive sea turtle emerging from the ocean, rather than a giant heaving log apparition, she asked excitedly, “Can I go? Please? Do you mind if I go really quickly to get everyone else?” The leatherback had elected to nest nearly as far away from the station as possible, and the return trip was a 40-minute run along the driftwood covered, steeply inclined beach. While alone with one of these rare creatures, I awkwardly collected her dinosaur sized eggs from a hole deeper than the length of my arm. Thankfully, Catherine managed to return with the team just in time to help measure the leatherback’s 1.5-meter-long carapace and watch her crawl back to sea.

Our team relocated the nest to a protected area, and it had the best hatching success of the nine clutches laid by the leatherback that season – 55 wee’ baula babies made it to the ocean two months later, which happened to be Christmas day. As this critically endangered subpopulation of leatherbacks has seen radical decline in the last decade, every one of these hatchlings that make it to the ocean is important. We were deeply saddened to hear that Catherine recently passed away from cancer. She left a piece of her passionate spirit behind in the people she inspired, and the sea turtles that swim on in her memory.