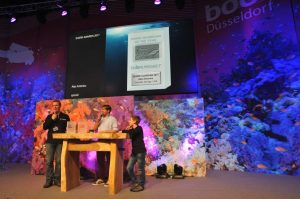 Dr. Alex Antoniou, founder and president of the Colorado based Fins Attached shark conservation non-profit was awarded the Shark Project’s SHARK GUARDIAN of the Year 2017 Special Award in a ceremony this month in Germany.  The award, developed by Shark Project, Germany and voted on by 31 international organizations, was presented to Dr. Antoniou during the BOOT International Boat Show in Dusseldorf as recognition of his 20+ years of shark conservation work and recent efforts to facilitate shark research in the Eastern Tropical Pacific Ocean.

Effective shark protection does not come cheap. Expeditions and research tours require huge sums of money and require complex logistics and personal dedication. Dr. Antoniou has helped a network of shark scientists in the Eastern Tropical Pacific offset these massive expenses, as well as organize the myriad of research expedition details that come with studying sharks in their natural habitat. He has supplied local researchers, at his own expense, with transmitters and receivers in order to track sharks’ migratory routs, in addition to offering hands-on help and advice to a long list of shark conservation organizations.

Recognition of Dr. Antoniou’s work was part of Shark Project’s annual SHARK ENEMY and SHARK GUARDIAN Awards presentation, the only shark protection awards worldwide. This year’s SHARK GUARDIAN award was given to Cathay Pacific airlines for the company’s strict ban on transporting shark fins on all flights. The SHARK ENEMY award we given to FedEx for its ongoing transport shark fins on a massive scale via its global network.